The new PS Plus: Sony simplifies and broadens its games content subscription offer

While there will be a like-for-like PS Plus basic tier, named PS Plus Essential, the existing PS Now offer will be essentially divided into two tiers, PS Plus Extra and PS Plus Premium. The content catalogue will be divided between these two tiers, with the most expensive tier, PS Plus Premium, also getting streaming functionality and game trials.

PS Plus Extra will include downloadable versions of a catalogue of PS4 and PS5 titles numbering in the hundreds. PS Plus Premium will include these and add downloadable versions of classic PS1, PS2 and PSP titles, playable via emulation, while also adding streaming functionality, taking the total catalogue across the two tiers to a similar total volume available in PS Now currently. PS Now’s catalogue size is between 750-850 titles depending on where you subscribe to the service. PS Plus Premium’s streaming functionality will enable access to additional PS3 games and cover most other content but will not include PS5 titles at launch.

Additionally, in markets where there is no existing streaming functionality (only available in 19 markets at present), PS Plus Premium will be known as PS Plus Deluxe and will be offered at a cheaper price point with exact pricing depending on the sales region or market.

The new PS Plus will be made available across all existing PS Plus markets (70+), marking the first time that Sony has brought a games content subscription service to markets outside of North America, Western Europe, and Japan. Sony aims to have the new offer up and running across its major sales territories by the end of June 2022, with it launching first in Asia, followed by the US and then Europe. 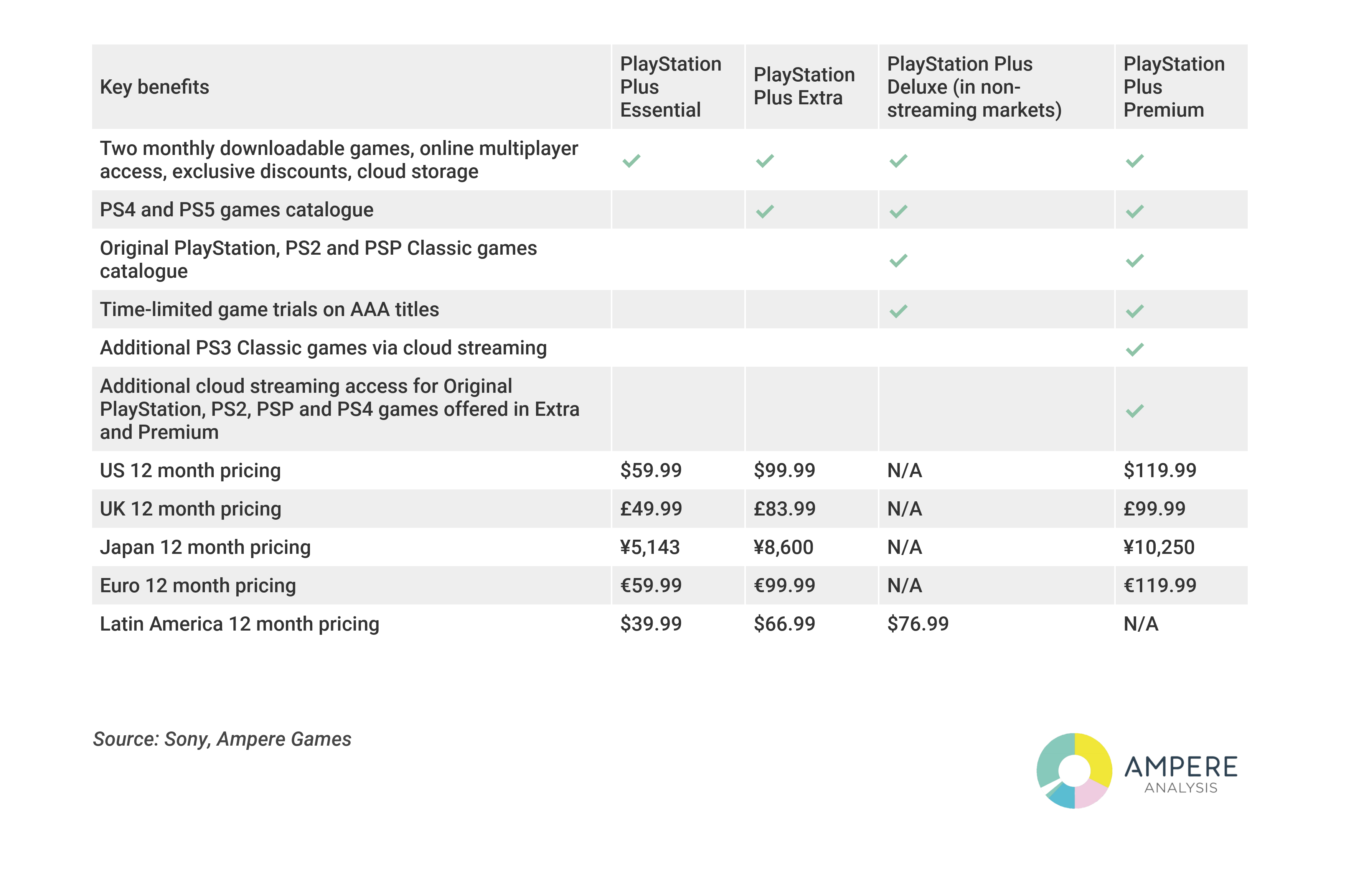 How does this new product strategy help Sony?

There are two major benefits to Sony, which will help it drive more users to its content subscription offer and improve on the adoption of PS Now.

First is a simplification of the product offer. Ampere’s games consumer research indicates that there is at least some confusion between PS Plus and PS Now. Rolling PS Now into PS Plus creates a substantially streamlined user experience for the gamer that already takes both subscriptions. There is also a more robust acquisition funnel for driving the large base of PS Plus subscribers into the content subscription portion of the offer, with the mid-tier PS Plus Extra being less than the current combined cost of PS Plus and PS Now.

Second, this is the first time that Sony has brought its content subscription to all its PS Plus markets. Expanding on the 19 markets of PS Now gives Sony an opportunity to grow its higher-value subscriber base to much better numbers than PS Now at present, which Ampere estimates sit below 4m.

This is an opportunity to drive higher ARPU subscriptions and build on the success of the current PS Plus service. It will not necessarily result in many more overall PS Plus subscribers, although adding a content layer may convert more users and reduce PS Plus churn. Overall, it should establish a stronger commercial framework for its subscription catalogue proposition, which over time will allow it to introduce more compelling games into the service.

Ampere Games data shows that Microsoft held a 60% share of the Western (North America and Europe) games content subscription market in Q4 2021. In comparison, Sony held just a 7% share with PS Now. The Western market was worth $3.7bn in 2021, which was 4% of total spending on games across these regions. 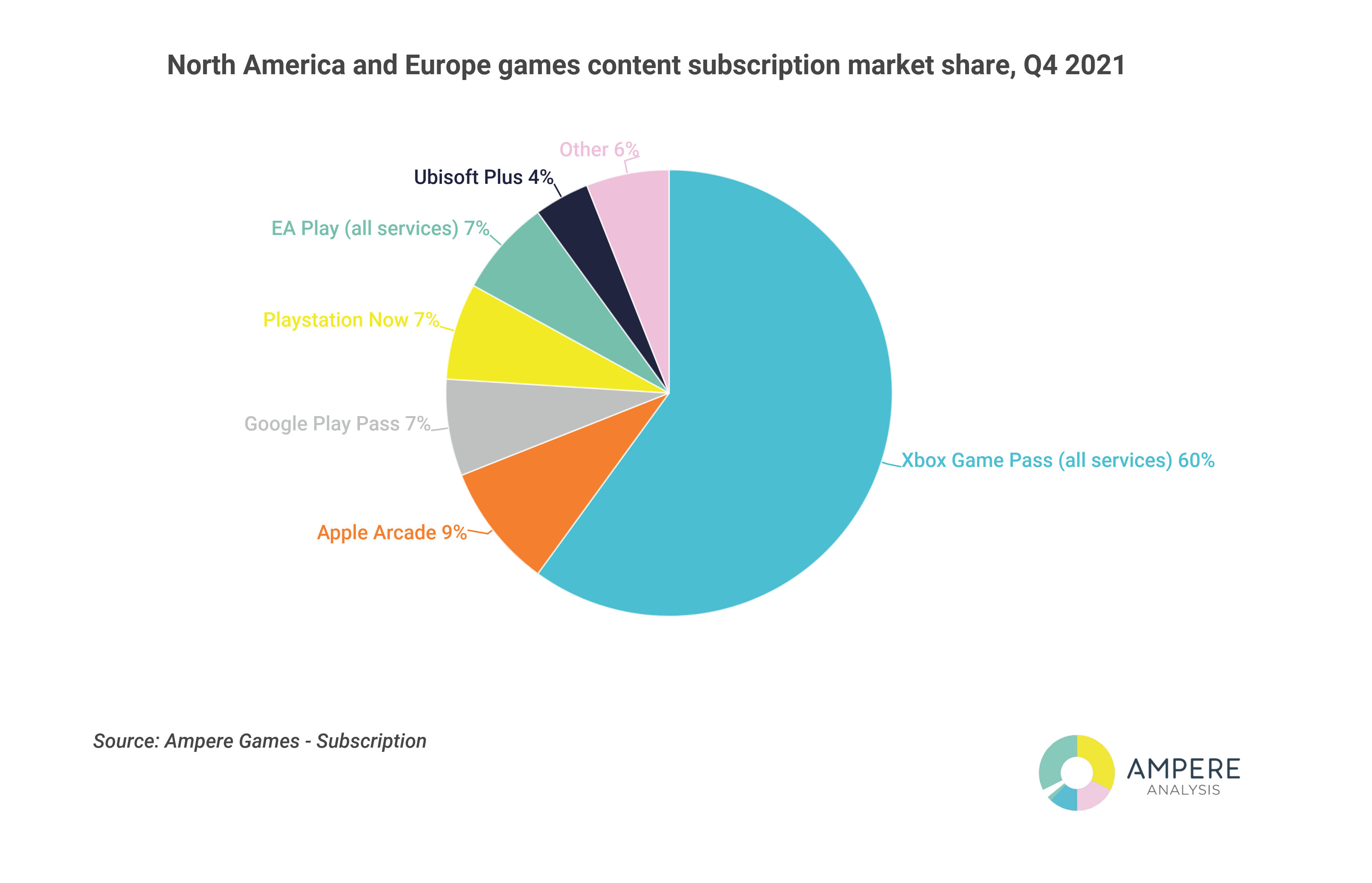 How will the new PS Plus compare to Game Pass?

In product structure terms, it is now closer to Game Pass than before. All three console platform companies are now pursuing the combined platform and content subscription proposition. However, rather than bundle in PS Plus with the highest tier offer as Microsoft has done with Xbox Game Pass Ultimate and Xbox Live Gold, the basic platform subscription is Sony’s lowest tier offer. This makes sense for Sony, as its base of 48m subscribers is far bigger than PS Now.

In terms of scale, this gives Sony the best chance of competing with Microsoft’s offer. Aside from the games on offer, Sony will be able to differentiate using its mid-tier offer, PS Plus Extra, that bundles a smaller catalogue of games with the normal PS Plus benefits. This is cheaper than Xbox Game Pass Ultimate when paying annually - representing $8.33/€8.33/£6.99 a month - but doesn’t include streaming. Ampere expects the low-cost upgrade to the PS Plus Extra tier to be popular.

Relegating streaming to a separate tier frees up Sony to roll out the service more effectively across all its sales territories. It is now a value-added proposition in select markets. While Sony says it will be adding more territories to the 19 where streaming is already available, that is likely to entail partnering with a cloud service provider or other infrastructure player to deliver.

Most usage for PS Now is focused on PS4 and PS5 consoles but having PC access to the catalogue through streaming supports both console users that are away from their consoles and those with no access to a console. As Sony increases its PC gaming proposition, it’s important to continue to engage this audience. What will change is that PC-only PS Now users, a small subset of total subscribers, will not have access to a content-only proposition and will need to subscribe to PS Plus Premium to receive a similar offer as before.

No first-party day one releases

The key difference to Game Pass is that Sony, at present, will not be adding newly released first-party games into PS Plus as Microsoft does. As such, it won’t have the pull of Microsoft’s service. However, we expect Sony to be more aggressive with windowing between release of its new games and when they are added to the service, and also with adding new releases from third-party developers and publishers. Games confirmed for addition to the service include Marvel's Spider-Man, Marvel's Spider-Man: Miles Morales, Returnal, God of War and Death Stranding.

It is worth mentioning that PS Plus Premium subscribers will get access to game trials and demos, adding further value to the current PS Now offer. From the publisher side this seems counter intuitive as it will be exposing those games to the smallest subset of subscribers, but this perk will also act as a conversion tool for the highest tier if the games are high profile enough.

Will it impact Sony’s margins or cannibalise premium sales?

Ampere believes this move should improve margins, as more gamers will be driven to higher cost subscriptions even if Sony does nothing to its existing PS Now catalogue strategy (i.e., does not increase upfront content acquisition costs). If content acquisition costs do increase, Sony will need to balance that with the additional revenue it will be generating from the PS Plus subscriber base to maintain margins. Scaling its higher-value subscribers should give Sony the leeway to be more aggressive in terms of third-party content acquisition for the service.

Most of the games included in PS Now are catalogue titles, so cannibalisation is not such an issue and Ampere does not expect that to change significantly with the new service. It’s worth noting that a growing share of games revenue is derived from in-game sales, which will continue to be available for games in the subscription, so there is more than one revenue stream to consider when assessing the potential for cannibalisation. As the service scales, it can act as a useful marketing and user acquisition platform for games that struggle to gain exposure against the biggest titles.

How important is it to engage subscription gamers?

Subscription gamers play more and spend more on games than non-subscribers so it’s important for the console companies to engage this audience. In the subscription setting, users try out a wider variety of games, and this willingness to try new genres and games helps to engage a broader audience. Having more people playing a game when it is added to a service can have a positive impact on adoption of that game outside the service through a network effect.

How will existing subscribers migrate?

Existing PS Plus subscribers will convert to PS Plus Essential. Those gamers with both PS Now and PS Plus subscriptions, which are often on different renewal timelines, will also migrate to PS Now Premium. Details of the migration policy will be released nearer to launch.