Consumer spending on games console hardware, games and games services grew to a record high in 2021 and reached $60bn. The games console market remains in rude health with Ampere forecasting it to grow again in 2022 to over $61bn. Although 2021 market performance reached new highs, it was held back to an extent by lack of availability of the latest consoles. The increase in spending was driven by higher priced new consoles available on the market and increased adoption of subscription services, such as Microsoft’s Xbox Game Pass. Spending on full games, expansion packs, battle passes, and in-game items declined only 1% compared to 2020, a great result considering the backdrop of heavy spending fuelled by stay-at-home orders during the previous year. 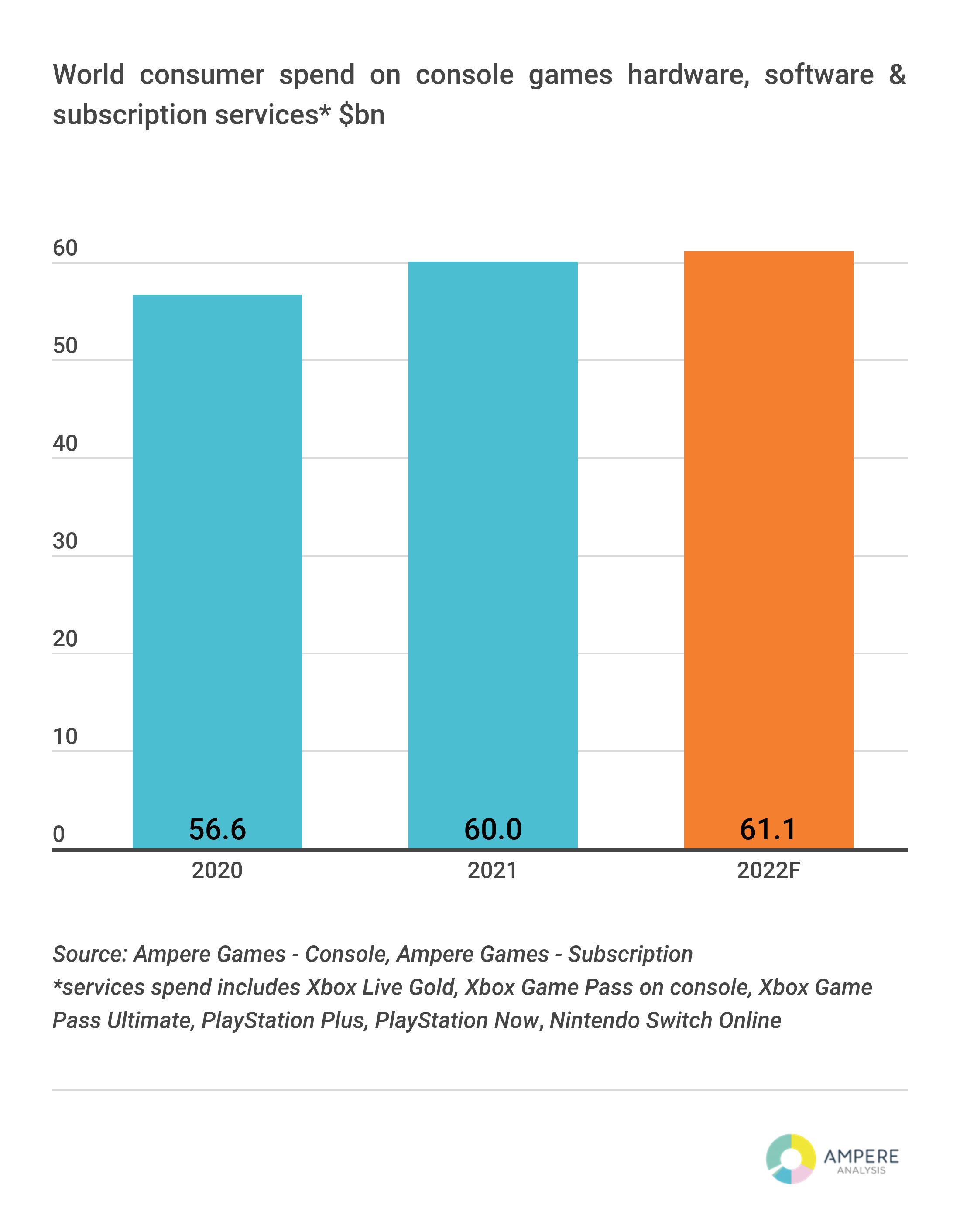 Sony marginally improved on its 2020 market share as its consoles generated spending worth 46% of the total market. Nintendo’s market share slipped 2% to 29%, while Microsoft added 1% across the year to 25%. Sony’s lead underlines the importance of the PlayStation storefront and platforms to third-party publishers and developers. It also highlights the strength of Sony’s digital business compared to Nintendo, which still lags behind the other platform holders across full game downloads, in-game monetisation and services. 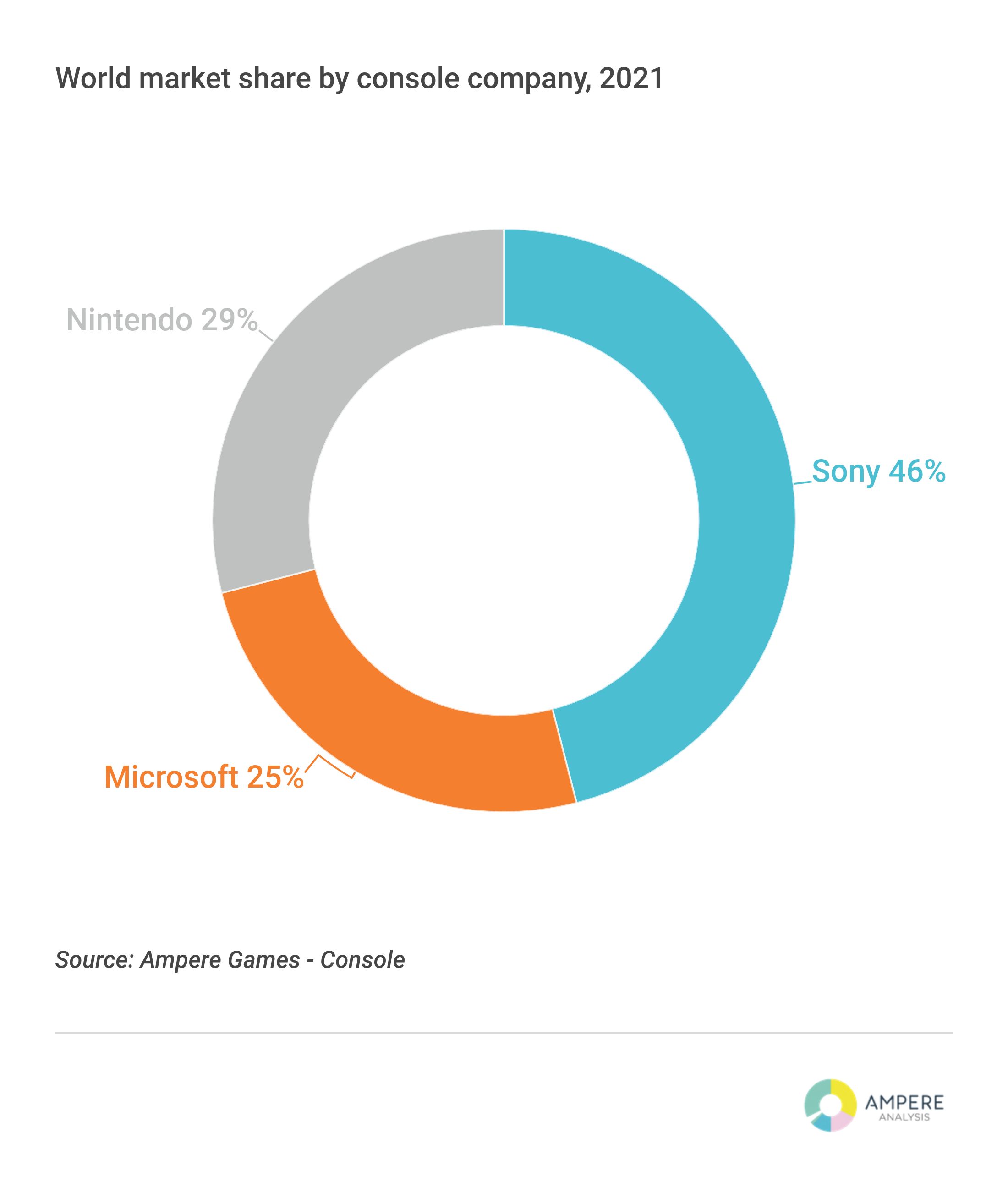 Growth in spending on subscription services was driven primarily by improved adoption of Xbox Game Pass Ultimate, while Nintendo Switch Online and PS Plus also contributed. Microsoft’s inclusion of numerous ‘Day One’ titles helped Xbox Game Pass build momentum in the second half of 2021 with the service reaching 25m paid subscriptions by the beginning of January 2022. 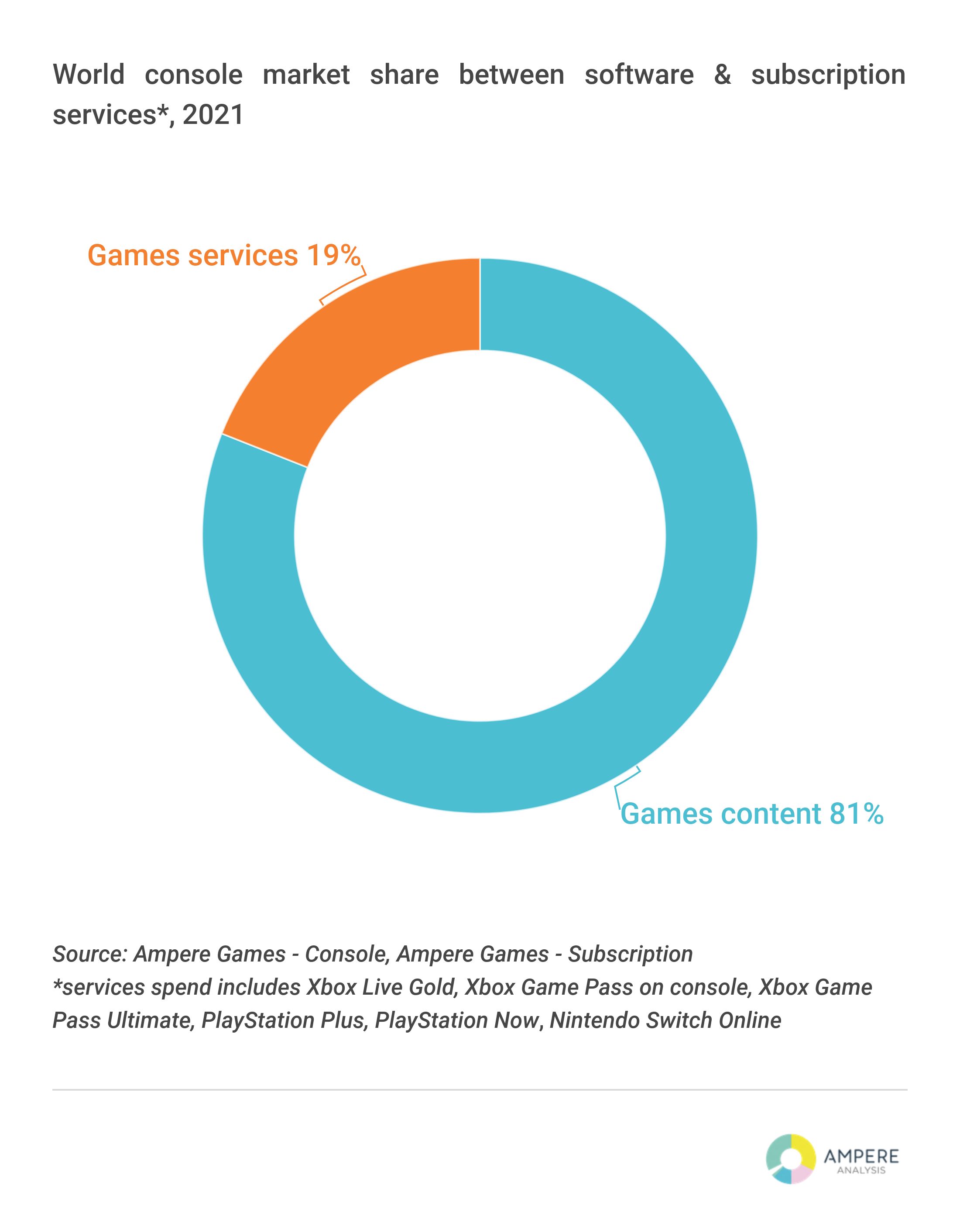 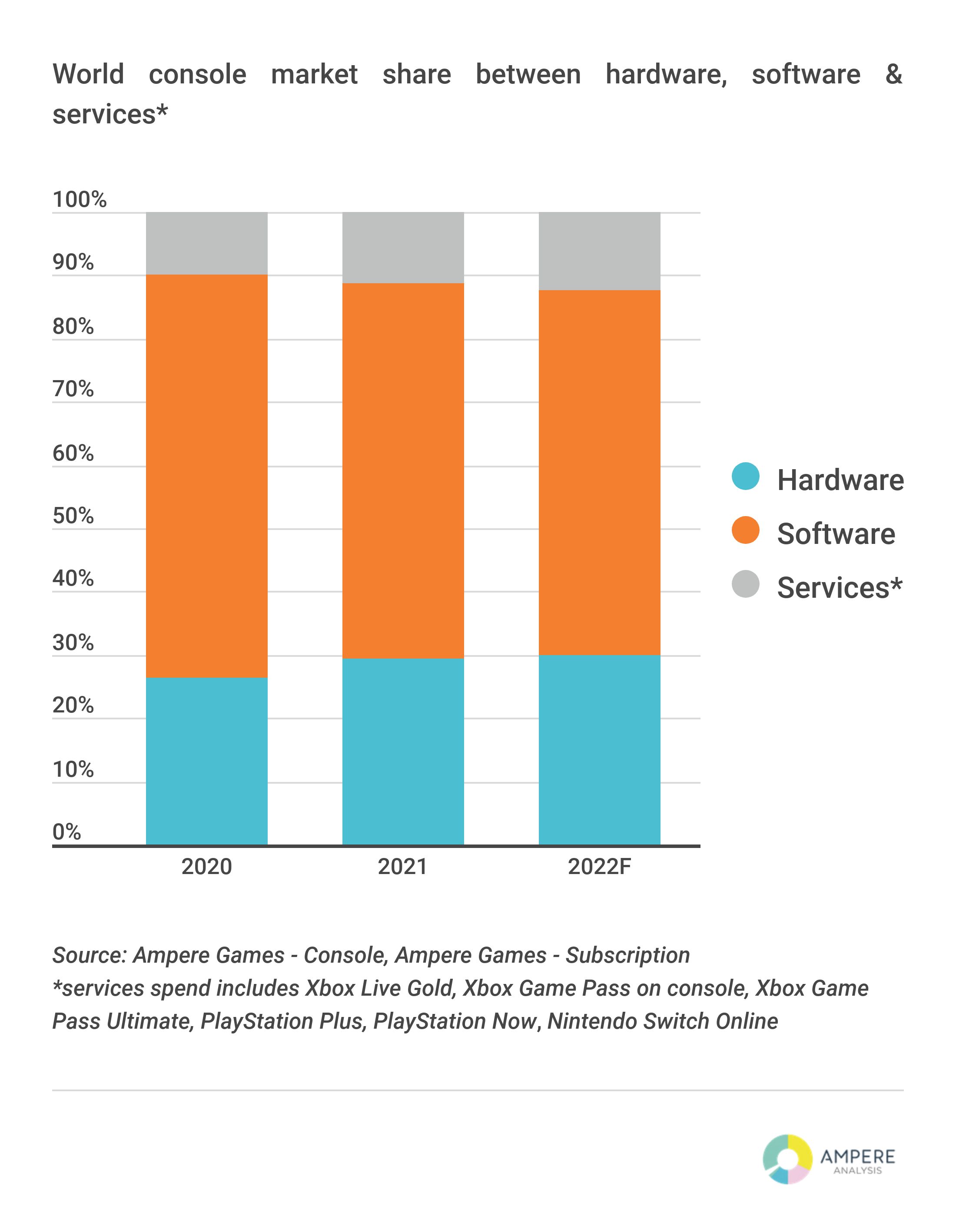 Nintendo Switch was the biggest platform for packaged games sales in 2021. Xbox spending is increasingly digital heavy driven by the sales success of Xbox Series S, its digital-only console.

2021 was the first time that packaged games sales dropped below 30% of a combined packaged and digital console games spend; the slow erosion of packaged sales will continue in 2022, with its share dropping to 26% according to Ampere. 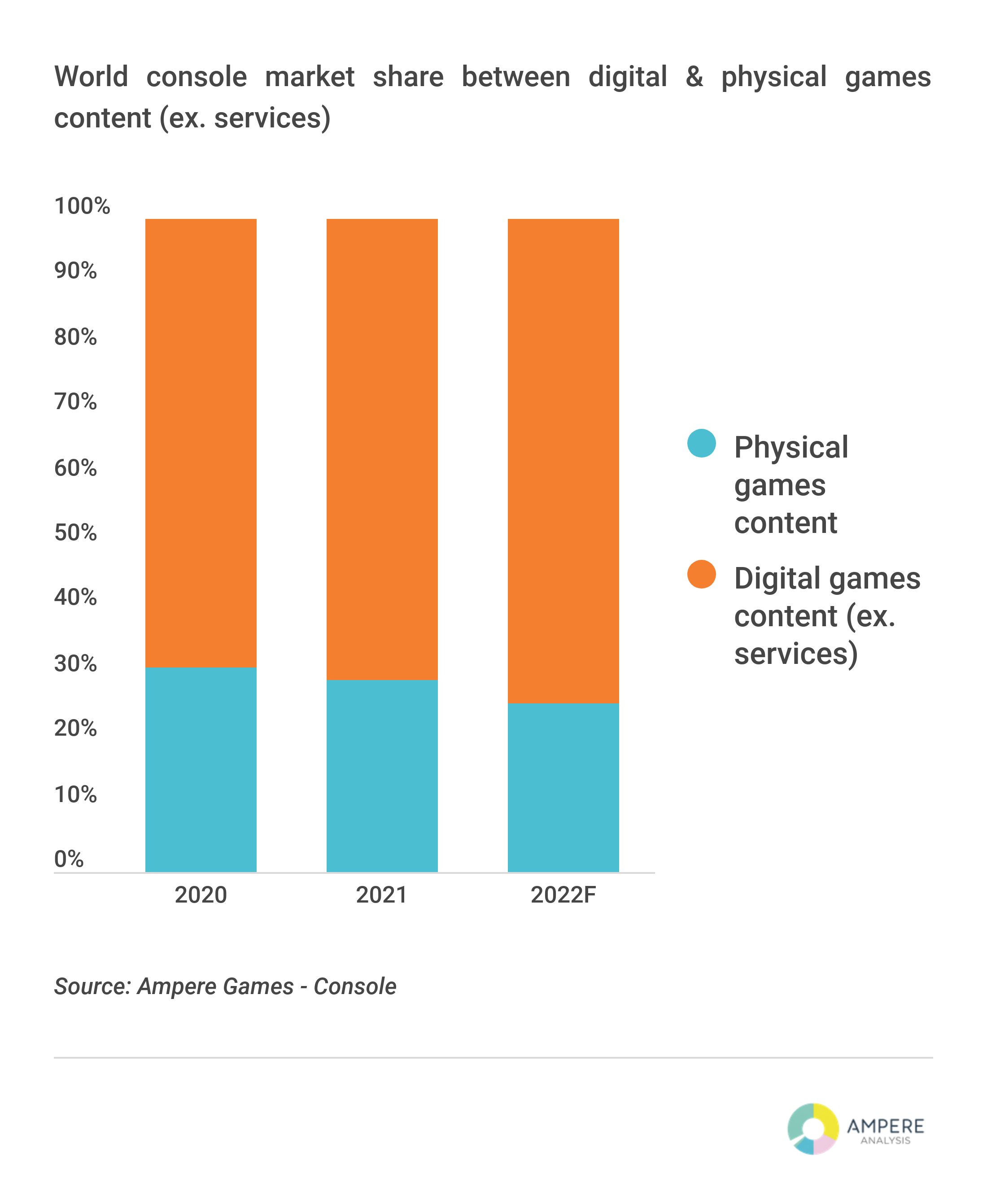 Games sector report detailing outlook for 2022 and 2023 based on Q3 performance. Back in June 2022, Ampere predicted that the games sector would decline in 2022; a further downgrade to the outlook following a weak Q3 means a new Global games content and services spending forecast of -4% for 2022, but with the promise of a return to growth in 2023.

This report provides an overview of the games-related investment activity tracked by Ampere Analysis in the first three quarters of 2022. Globally, the total disclosed deal value reached $111bn in Q1-Q3 2022, with a deal volume of 523.

This presentation was delivered in June 2022 and examines the latest games market performance and expectation for 2022 and 2023 in a post-pandemic landscape, and explores the most important industry trends driving strategic decision-making across the games sector at the mid-point of 2022.