Streaming-only services represented 5% of the Western market in 2021

The latest Ampere Analysis data shows that the North America and Europe games content and cloud gaming PC subscription market was worth $3.7bn in 2021, growing 57% from $2.3bn in 2020. The market, which combines games content subscription services that give access to a catalogue of games and services that offer access to a gaming PC in the cloud, is dominated by download-only services or services that employ a mixed model of distribution across both download and streaming. Streaming-only services make up just 5% of total spending, although that share is expected to steadily increase over the next five years and will be 10% by 2027. 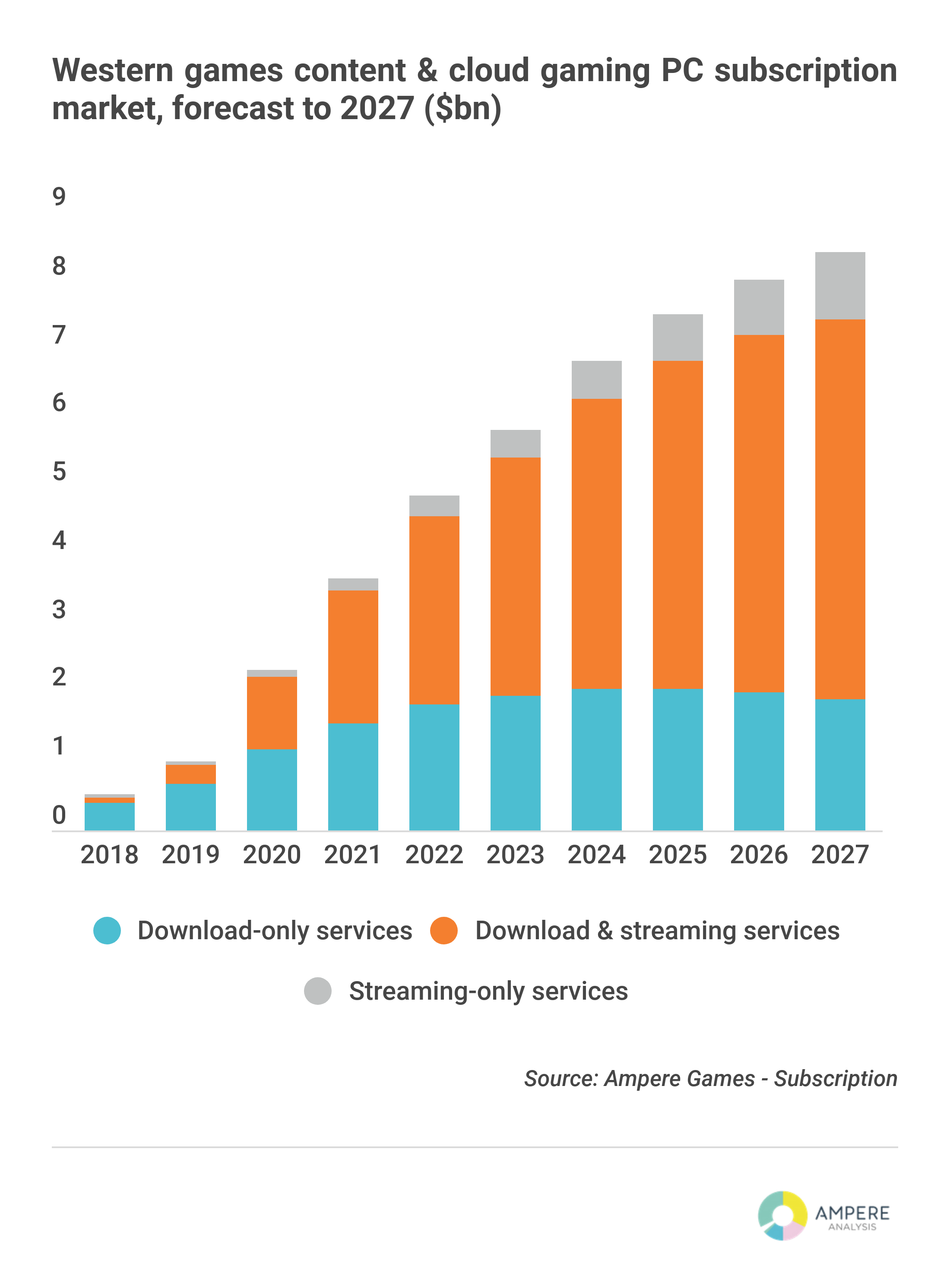 The market’s biggest service, Microsoft’s Xbox Game Pass Ultimate, adopted streaming distribution towards the end of 2020 following extensive trials of Project xCloud, but in 2022, Xbox Game Pass Ultimate remains primarily a games download subscription service. Streaming functionality is geographically limited and for most subscribers, streaming is a value-add to the core offering of the service, which is focused on access to a quality games catalogue to download and play on consoles and gaming PCs. Indeed, part of the strength of Microsoft’s service is its flexible approach to distribution, recently reinforced by its decision to bring streaming to Xbox One and Xbox Series consoles, enabling new ways to access content more rapidly in support of its core download functionality. Sony has already pioneered this approach through its own service, PlayStation Now.

Download distribution dominance is clearly illustrated by Ampere’s consumer research which asks Xbox Game Pass Ultimate users how they access their games (see chart). Most usage is download-focused. As such, bucketing hybrid services such as Xbox Game Pass Ultimate and PlayStation Now into a cloud gaming market sizing is misleading and over-estimates the impact of this distribution technology in the near-term. 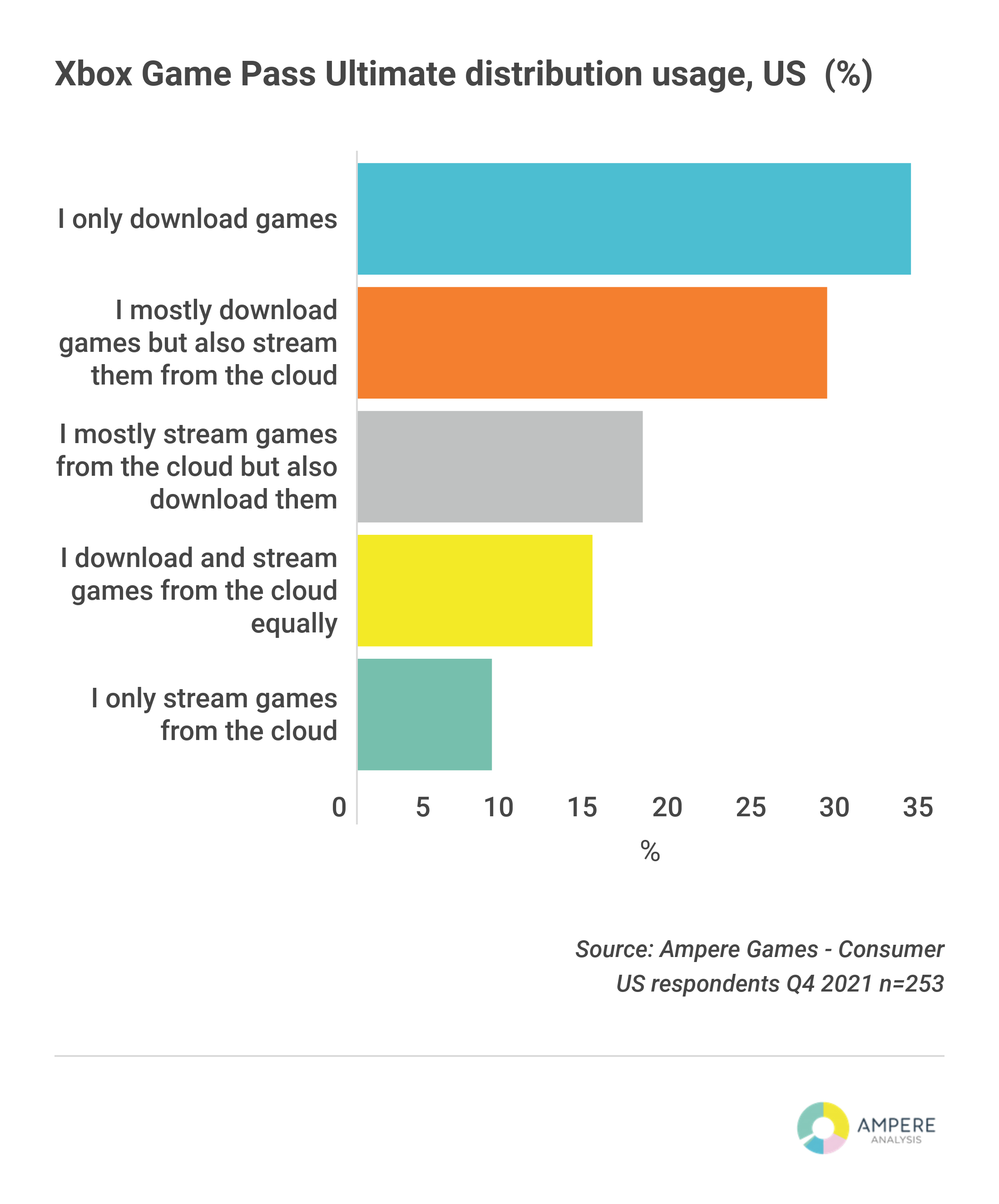 Streaming is the key to expansion beyond consoles and gaming PCs

However, streaming distribution will gradually become more important to the games content subscription market over the next five years. While console users represent the core of Microsoft's service for example, its future growth will increasingly rely on converting non-console users through its streaming functionality. As such, Ampere expects Microsoft to bring Game Pass to additional mobile-first markets in the near-term, possibly with a mobile-only lower priced subscription. These new adopters will gradually shift the overall usage of the service more towards streaming.

Xbox Game Pass (all versions) had 60% share of the total Western market in 2021. Microsoft’s dominance of the games content subscription opportunity is driven to a large extent by its catalogue strategy and its inclusion of all new first-party releases and increasing amounts of third-party ‘day one’ releases. The release schedule of Xbox Game Studios coupled with increasing amounts of new third-party releases will drive growth of Game Pass in 2022. Eventually, we'll get one or more big third-party franchise releases going straight into Game Pass; we could see that happen this year.

Sony’s competing service, PlayStation Now, has failed to have the impact of Xbox Game Pass. Recent rumours of a re-focusing of its console subscription services make sense in the context of Microsoft's success. Ampere expects PlayStation's subscription business to be overhauled in 2022 to position it more strongly for the future. It is less likely that Sony’s new first-party games releases will be added to PS Plus/PS Now anytime soon, so in this respect a rebooted service will still differ from Xbox Game Pass. However, new release third-party titles are on the table as we've already seen in PS Plus and the window for adding first-party games may be shortened. You can read more of our analysis on a potential overhaul here.

In terms of users and paying subscribers, Nvidia is establishing a dominant position in the cloud gaming PC market. In contrast to content subscription services, GeForce Now gives users access to a gaming PC in the cloud and third-party PC games storefronts such as Steam and Epic Games Store, where they can stream their existing games or buy new ones. It also has an extensive roster of free-to-play games. According to Nvidia, the biggest share of GeForce Now users are consumers using older PCs with integrated graphics. The service acts as a platform to enable these lapsed gamers, which can then be upsold GeForce GPUs to in the future.

Nvidia lacks the ability to drive adoption through its own games exclusives as it operates a bring-your-own-game service and doesn’t have the distribution flexibility of Microsoft’s service, but a sole focus on cloud gaming does have its advantages. By supporting a large list of games through third-party PC game launchers, Nvidia’s service leads the way in terms of availability of AAA games in the cloud. Nvidia’s technological focus also enables it to differentiate on service quality and performance, key attributes to attract high-spending enthusiast gamers.

Over the last two years there has been a rapid expansion of telco-based cloud gaming services across Europe based on the technology and catalogues of white label providers in this space. While all of these are small scale, the commercial reasons for launching a service go beyond direct revenue generation as they support various product strategies around 5G and full fibre services.

Even so, the difficulty of establishing new ‘local’ gaming brands against the established international players and the commercial reality of cloud gaming services were underlined by Deutsche Telekom’s decision to shut down its service Magenta Gaming after only 18 months. The German incumbent telco put considerable effort behind trying to establish the Magenta Gaming cloud gaming brand, even going as far as to negotiate licensing of some games included in its catalogue directly. Ampere believes that part of its failure was its inability to reach the correct audience, with most of its marketing efforts seemingly focused on traditional enthusiast gamers, who are likely to have access to multiple gaming devices and services already.

This report examines the catalogue changes of 20 games subscription services across 30 countries in May 2022. The analysis includes publisher activity, content age, and genre makeup.